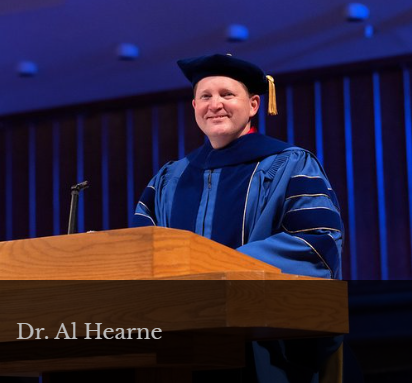 When Dr. Al Hearne moved to Castro Valley with his wife and family in 2002, he said he never imagined that one day he would be shaping the lives of the students who live here.

“I was working on my master’s degree in Divinity, focused on the writings of Paul the Apostle when we arrived,” Dr. Hearne told the Forum. “I got a job at Redwood Christian and really enjoyed teaching 7th Grade English and 8th Grade Math. The middle school students are so much fun and asked insightful questions. And if you need to get on to them if they're misbehaving in class, they're respectful.”

A few years later, Dr. Hearne converted that love of teaching students into getting a master’s degree in Arts in Educational Leadership, beginning his long tenure at Redwood Christian Schools.

“I love the Castro Valley community. It’s got the feel of home,” he said.

Originally from the central valley city of Porterville, Calif., Hearne's parents were both teachers. His father taught for more than 30 years in public schools. His mother taught for five years in junior high schools while raising the family and starting a Christian ministry program in town. Hearne, an avid coffee drinker, also enjoys fishing and reading in his spare time.

And while he didn’t initially think of himself as an administrator, longtime Redwood Christian School superintendent Bruce Johnson mentored Hearne to be his replacement in 2016.

“He called me into his office one afternoon, and we began talking. My wife Megan and I prayed about it and decided it was the right thing to do. So, I met with the superintendent weekly and we began to map out the transition.”

Redwood Christian Schools is a highly rated, private, Christian school with two campuses. The elementary school campus and administration offices are in Castro Valley on Redwood Road. The combined middle school and high school campus is in San Lorenzo. The schools currently serve 712 students in grades between pre-Kindergarten to 12th Grade with a student-teacher ratio of 14 to 1. Tuition is $12,909 for the highest grade offered. After graduation, 95% of students from Redwood Christian school go on to attend a 4-year college, Hearne said. Some favor Christian colleges such as Azusa Pacific and Biola University, but a good number of graduates are accepted into UC Berkley, Stanford, and UCLA.

“One of our life students—what we call a student that has been with us since kindergarten—Xander Russell was accepted to Stanford University on his academic ability alone. It's a testament to his hard work and the lessons he learned while he was with Redwood Christian,” Hearne said.

Like everyone else, Redwood Christian Schools (RCS) had to be flexible in dealing with the COVID-19 pandemic. In 2021, RCS was one of the first districts to reopen classrooms to hybrid learning. Students were tested frequently, split up into cohorts, and teachers were equipped with protective gear. Hearne chalks up the ability to pivot to in-person learning quickly because they are a smaller district. That summer, the schools ended up hosting 76 separate graduation ceremonies because health regulations only allowed 10 people in a small gathering space.

Hearne notes that because Redwood Christian schools were able to keep in-person learning for longer than other programs its students did not experience the same levels of learning loss as their public-school peers.

“Our student body is at 70 percent above the national average for reading, writing, and mathematics,” Hearne said.

While RCS operates within Castro Valley, Hearne is quick to point out that Redwood Christian is not in competition with the Castro Valley Unified School District public schools and that he and CVUSD Superintendent Parvin Ahmadi are often in contact to share learning strategies and administration advice.

“RCS serves a different set of family needs,” Hearne said. “Every family is looking for what they want out of an educational system for their child. What we’re known for is that we take really good care of kids. Our school culture and climate are similar to that of Castro Valley Unified in that we're a big family. Teachers who are here are here because they love kids first and foremost. Every student is brought into our classroom we believe because God brought them here. And along the way, we teach them amazing academics.”

In addition to academics, Hearne says he's proud of the work RCS students do for the community including supporting the Rotary Club and Chamber of Commerce.

“There is not a major event in Castro Valley that you don't see kids from Redwood Christian participating in and volunteering their time,” Hearne said. “Our kids know how to work. They know how to communicate, they're polite, and they are not on their phones the entire time. You can assign them a complicated task and they will get it done to the best of their ability.”

Hearne says he's optimistic about the future because of the students who come from Redwood Christian and is always excited when he recognizes parents that he taught bringing their kids to Redwood Christian Schools.

“One former student told me he wouldn't bring his kids anywhere else,” Hearne said. 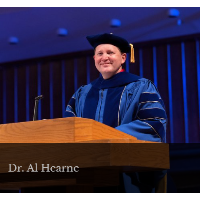